Was my first time at an annular eclipse (with 100% contact – have been in partial contact once in 2005). Just to be clear, an annular eclipse, contrary to a total eclipse, does not induce darkness due to the increased distance of the moon from the earth. To understand further, you might want to see this image (preview on the right).

Pavan (an active volunteer of BAS) was accompanying me and Raghu on this trip. We drove to Dhanushkodi via Madurai and Rameshwaram (the oncoming two/three wheelers on your side of the lane deserves a separate post). We almost got killed by an oncoming Ambulance. A day’s stop in Madurai on Jan 14 and Jan 15th saw us in Dhanushkodi (DKD). DKD is right across Pamban bridge, some 10 Kms from Rameswaram. It’s a small island, surrounded by the ocean on two sides and extends to the last point of India that just touches Sri Lanka. 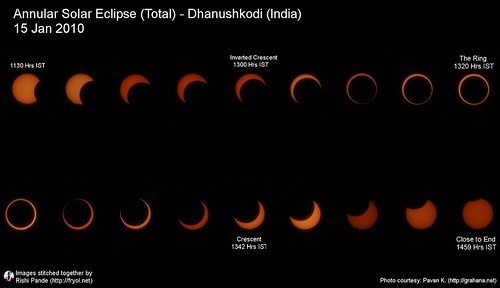 Contrary to expectations, DKD was free of an enormous crowd. The Tamil Nadu Science Society was organizing an event there (and quite a few folks from Assam – the Guwahati Planetarium, Gujarat, Bengal etc. were to be seen). Photos were being clicked as the “Media” approached us and we shyed away. Though we were carrying a telescope, due to lack of a filter we could not set it up and missed  the oppurtunity to use it. Pavan got a filter for his camera right on time (though I carved out something with an X-ray sheet, but the mylar sheet filter was definitely a better bet).

First contact of the eclipse was at 11:15 AM – as we put on our eclipse viewers, the sight was stunning.  The intensity of the sunlight decreased by as much as 75% (approximately) and the temperature certainly decreased by at least a couple of degrees (if not more). The sea wasn’t very rough, but the tide certainly had increased a lot more than what it was in the morning.

At about 1:20pm, we saw the ring – a beautiful sight as I kept gazing at it. There’s still a lot of light around you, just that it is white and not the usual yellow light and the intensity is nothing like a sun in a clear sky. The sky was spotless during the maximum eclipse around the sun, but it felt like there’s a cloud covering. Something very unusual, but a characteristic property of an annular eclipse on the ground. To understand how the eclipse traces the path on the ground, see this image.

We came back to Rameshwaram, stayed on till night and hopped back home the next day.

Interestingly, Raghu pointed out that I ended up following the popular superstitous Hindu activity of: