Skip to main content
Chatting with my 5 yr old, I realized that she had a particular resistance to the words “I don’t know.” It was an indication that I had to put something to an end for her, and “I don’t know” if it was fear or something else. I just don’t know. What I knew was, she had to become comfortable.

We started with the concept of asking “why” more. She prides herself heavily in knowing answers, and like most kids, takes a lot of joy in the praises therefore. Once we settled, she quickly asked me, “why is it ok to say I don’t know?” My job was half done, and I was sufficiently pleased with Vasvi. If anything, I told her, “you will never know everything, I don’t know the answers to most questions.” For brevity here, I did explain that “I don’t know” is the beginning of knowledge. There is no end, and when no one knows the answer, you have the intense potential to make meaningful impact. The trick is to know what is already known to get to the limits of available knowledge.

The conversation was sparked when we read an article on a quote from Einstein, that was about spending most of the time on a problem, than thinking about its solutions. In a recent interview, this was my biggest peeve. The candidate jumped to solving the problem in the first few minutes, without analysis or questions on the problem itself. At the end of the interview, when the algorithm chosen didn’t solve the corner cases of the data structure provided, I did mention, “I wish you asked me about ‘why’ I was even posing this problem.”

Most people presume that the world around them is in some harmony. This is what I want to prevent my daughter from sliding into. The harmony is a good thought, not exactly reality. Making your kids understand that the last generation doesn’t exactly have their ducks in a row, is what drives us forward. The sooner they get it, the more curious they become.

Ultimately, curiosity evolves the cat. A couple of hours I spent chatting with my father this weekend brought back some intense curiosity about how do ATM machines verify currency – that was easy to answer. What stumped me was, “how did they do it in 1980s? There were no scanners.” After a minute of googling it, the term ‘magnetic ink’ lit the bulbs. One thing led to another and I had a huge spike of curiosity, meaningful enough to keep the rest of the weekend interesting.

The only challenge is, curiosity to me, is not to be driven in the direction of what cannot be known because it is dependent on human reaction. In other words, if sound and unemotional logic cannot be tied back to a reason, the trip is unworthy. Vasvi agreed, but did not ask why. That is a discussion for to tomorrow, and it may turn out that she enlightens me to prove me wrong.

This last Friday, after just over two years at Twitter, I decided to drive down the street to Uber.

The most difficult part of this decision was the fact that I only spent, what seems like an extremely short time at Twitter. The experience was amazing – the methodologies, the technologies and above all, the wonderful people I’ve had the honor to work with.

Will truly miss the relationships I’m leaving behind, especially my immediate team (Aras, DRob, DavidJ, Jeff, Joe, Mike, Toby and Zeke). And then, there’s Ian – who has become a very close friend in this very short time.

Really looking forward to the next adventure.

About 20 or so years ago, I had the privilege of having a guest at our place. Amazingly enough, we would almost always have dinner on the dinner table, unlike how I’m used to with my kids (on the couch, bed, standing and sometimes, on the table meant for this exclusive function).

This guest was from a part of India, now known for its exceedingly high PM2.5 (particulate matter). The air pollution itself is responsible for lung and neural diseases. Add to that the fact that you have sewage seepage into drinking water pipes and we’re talking serious long term damage to the brain and lungs.

Cut: back to the guest at our dinner table. As is customary, you serve your guests (with generous portions of food), and acting the good boy, I started doing so. Taking the lid off of one of the bowls, I kept it facing down on the table. “WHAT are you doing?” said the person, very perplexed and a bit chidingly. Looking confused, I asked, “What am I doing wrong?” – as that was obviously the question instead. “Don’t put that lid facing down on the table, ‘germs’ will get back into the ‘daal’ from the table when you re-lid it.”

This was a lesson that I haven’t unlearned since. The transfer of biological hazard from a dining table that looks clean, but really isn’t – through a lid’s internal surface. It made total sense. My father did laugh in a way that made me think that he disagreed with the phenomenon, but didn’t want to argue unnecessarily.

Many many years on, an offspring of this guest was infected with Typhoid. If you don’t know, the only reason you can get Typhoid, is when you have consumed human fecal matter. The only sane way for that to happen, is through contaminated food or water. The only places with the highest reported typhoid cases in the world, are Africa and India. Note, “reported.”

As I was reading an article on Delhi’s PM2.5 levels (close to 1000 now), and the mention of contaminated drinking water, I realized something.

People often obsess over things they’ve been brought up with. There is a lot more to be obsessed about, but the key learning for me and my kids is to constantly evaluate your obsessions. This guest’s freak out, made a lot more sense in 1970s may be, but there are way more things to worry about in 1996 – and the perspective changes even further, in 2015.

The last place to get bacteria in your food is from the dining table. FWIW, those bacteria are probably going to help strengthen your immunity. Worry about the lavatory more, or, if you’re in Delhi, about the sewage pipe running next to your water supply. Welcome to sanity.

After 7+ years, I am leaving Yahoo. Going to join “the flock” at Twitter.

This is big and then, not so big for me. My role and responsibility remains somewhat unchanged as I go from Yahoo to Twitter, but I’m moving to San Francisco (the movers finished that yesterday). So, living in the city will be new. I’ve not taken very kindly to the traffic there so far, but this will change I’m sure.

Yahoo is an amazing place to work for. I’ve repeated this, that I’m not that good at transactions. When it is not time to buy a house, I go and buy one. This, was probably not the best time to leave Yahoo. The share price is kicking and the products coming out are simply amazing. I can’t say here, but there are some amazing surprises on the way for people using Yahoo products. I don’t say this because I work(ed) there, I really mean it. If you want to join Yahoo, this is the time – and it is not going to be easy. It is well worth it.

Then why did I decide to move? I was getting very comfortable. Things were  smooth, stuff was getting done and all the wheel-work needed was just some oiling here and there. I felt that this was the best time for me to get out of the groove as well as the team and people I would transition things out to/for wouldn’t be as affected. Taking a lot of time and careful thinking for the transitioning, I am happy that it has been very successful. Much better than leaving a ship that’s about to sink.

People in my team have extended amazing support for this decision. I am very moved by their kind words and actions during the last few days. This has been a big surprise, since a big part of me always felt that I was not doing enough for them. I want to call out (and in no particular order): Alex, Deepthi, Hitesh, Sudip, Ram, Mike, Muthu, Tom, Jason, Sachin and Srinivas for everything they’ve said and done. Thank you folks, you all are simply awesome. Selling Yahoo is extremely convincing when I give examples from interactions with people like you.

Twitter is an equally amazing place to go to. Seeing the amazing energy in the Twitter office, I’ve been very excited about what they’re doing and about to do. I am yet to find out more, but from what little I’ve seen, the people there are super nice (just like Y) and the culture is alive and kicking. Their technology platform stack is either mostly open or about to open up, something that excites me even further.

All said and done, it is no lie that if you cut me, you shall see that I bleed purple.

When hunger strikes, you have to finally get cooking. For the first time ever, I served food out for myself like a civilized being (instead of devouring from the pots and pans). 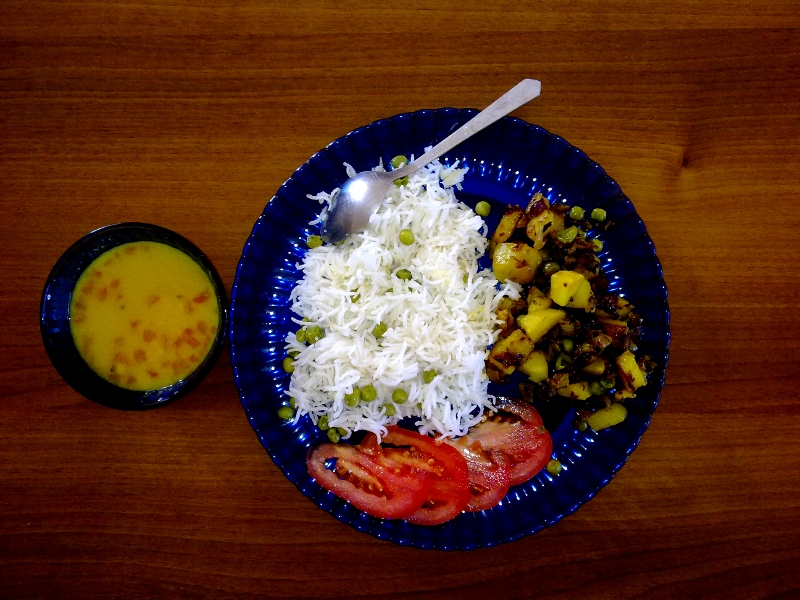 Took about 35 minutes to do this.

Got a disassembled futon at my place – and it’s assembly was quite a project. Took me about two hours to get it together. Photus phollow (wife took camera away to click our daughter, so the trail is a little incomplete).

…arrived 8 days apart – one at my brother’s place and the other one at our place last night. Cutenesses.

As much as it is unbelievable, this relates to my previous post that once again I have news of three more daughters born to people I know (or have known). For some of them who are not in touch, I really am glad for them. My unbound blessings fly down on the angels.

All the right things are seem to be happening in their own way, just someone fix that oil leak please – and, like let go of Kyrgyzstan’s problems – and of course, @Americans: can you start saving more than spending something you really CAN-NOT-AFFORD?

I have come to believe, that life isn’t sweet as much as it in the unexpected corners. So let’s “uncorner” those things that get ignored just because they are not perfect. I mean, you can make every thing nice and square, but then what’s the fun?

So see this comment, and if you have a little more time, read the whole post (and the comments). I leave it to you to decide on when you want to stop laughing. No rules. No offenses either, just laugh and forward err, forget. ;)

This is some blog-ham, if you don’t mind. Heh.